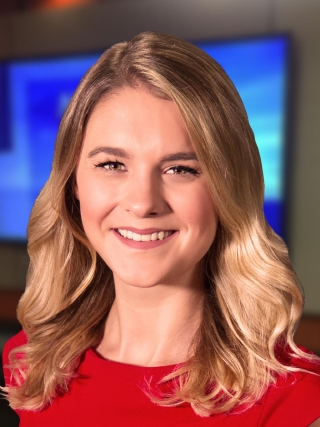 Caitlyn Penter joined the WLOS nightside team in August of 2019.

She previously worked as a multimedia journalist at WTGS in Savannah, Georgia. While there, she covered the 2018 Georgia governor’s race that received national attention, the shooting death of a Savannah police officer, and a black media only election meeting.

She is a proud graduate of the University of South Alabama in Mobile, Ala. She graduated with a double major in broadcast journalism and political science. While in college, she interned for WLOS’s sister station NBC 15 in Mobile.

Caitlyn grew up just a few hours away in Kennesaw, Georgia. She is a huge Falcons fan. Rise up!

In 2015, Caitlyn had the unique opportunity to serve as the Distinguished Young Woman of South Carolina, formerly known as America’s Junior Miss.

When she’s not out reporting, Caitlyn loves going to the beach, watching cat videos and testing out new recipes in the kitchen.

Caitlyn wants to tell the stories that viewers care about. She strives to call attention to the issues people deal with on a daily basis.